The utilisation of waste energy in industrial enterprises has enormous potential in terms of energy efficiency, the exploitation of which delivers both positive ecological and economic benefits. 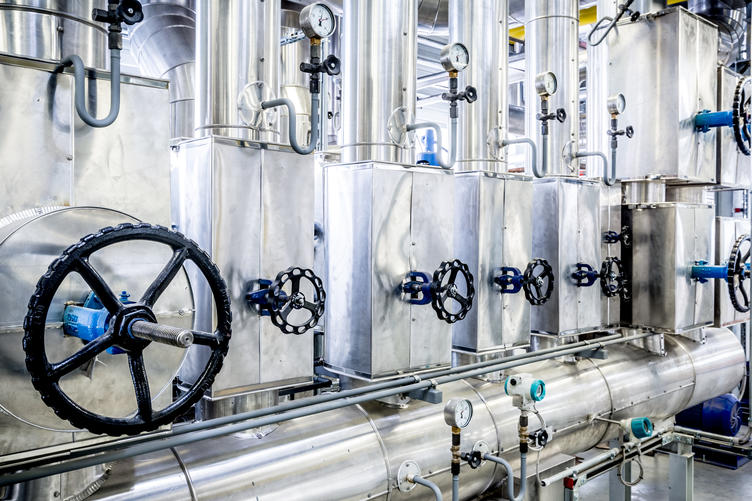 In these days of mounting environmental awareness and more intensive discussions on the subject of sustainability and the concomitant conservation of fossil fuels, the energy industry is focusing increasingly on the topic of energy efficiency. Both of these topics are intimately entwined.
There are two options for increasing the energy efficiency of power production facilities. In addition to renovation or modernisation of the plant and depending upon the specific circumstances, the utilisation of hitherto neglected energy potentials, such as waste heat, can contribute to a net increase in the energy yield from the primary energy carriers and therefore to increased energy efficiency.

The term 'waste heat' refers to any heat generated by a living organism, technical plant or process, which is dissipated into the surrounding environment without being used. It is created through inefficient facilities or process management as well as through thermodynamic constraints.

It is classified with reference to the prevailing temperature level in accordance with the following scheme:

The greatest untapped waste heat potential is to be found in the industrial sector. Extremely energy-intensive production processes are especially prone to the creation of heat loss sources, in which useful energy generated from primary energy carriers is dissipated into the surrounding environment as industrial thermal waste.

In practically every industrial sector

Technologies for the exploitation of industrial waste heat

There are many technologies available for converting hitherto unused energy into usable energy. The following is an overview of the most important technologies and approaches. 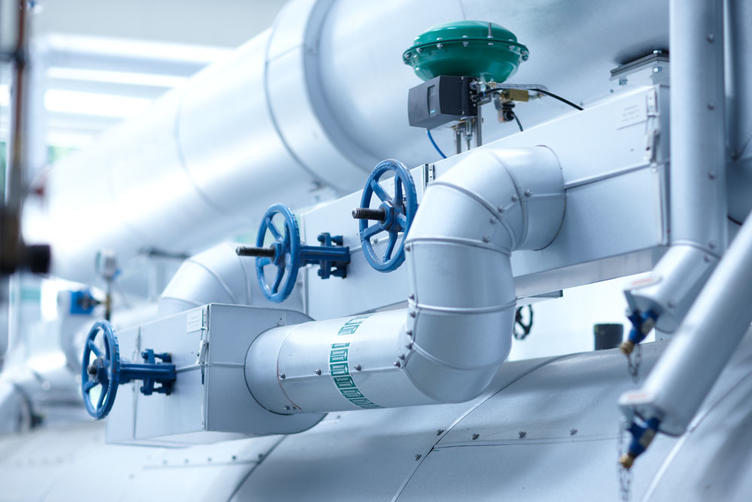 This is the most efficient and, at the same time, simplest technological approach to waste heat recovery. The waste heat, for example from an exhaust flow, is extracted via a heat exchanger and transferred to a different medium, whereby the heat transfer medium may be hot water, thermal oil, steam or a gaseous fluid. The transferred heat is transported via the heat transfer medium to existing heat sinks for further utilisation.

Which heat transfer medium is most appropriate in any given case and which parameters (pressure, temperature etc.) are required, will depend upon the available heat sinks. In this way the waste heat can be used as a substitute for primary energy carriers to generate process heating in the form of steam or thermal oil. Another area of application is the provision of heating energy. The supply of recovered waste heat into an existing district heating grid is promoted in the context of the national KfW (Credit Bank for Reconstruction)-sponsored energy efficiency program “Waste heat”. For example, in production processes involving firings and the use of furnaces, this extracted waste heat can be used to preheat the combustion air, which itself reduces the level of primary energy carrier consumption. Waste heat utilisation through direct heat recovery and heat displacement is characterised by a high level of efficiency. The associated losses are restricted to those that occur during the thermal transfer process. From an economic perspective the financial expenditure is relatively low compared to the energy gains.

Converting waste heat into electricity follows the same basic principles as the previously noted energy recovery concept. In the absence of heat sinks capable of being serviced by the energy generated from waste heat, the heat transfer medium can be used for conversion to electrical energy. Two main technologies are used to convert waste heat into electricity. Either the conversion is achieved via a closed water/steam circuit using a steam turbine or else a thermal oil or hot water circuit feeds into an Organic Rankine Cycle (ORC) in order to generate electricity.

In essence, the generation of electrical power from waste heat using ORC largely functions in the same way as a steam turbine. It only differs from the steam turbine in terms of the working fluid, which, in the case of ORC, consists of an organic medium instead of the water used by the steam turbine. The thermodynamic characteristics of this organic medium differ from those of water as a result of which it can be vaporised at lower temperatures and at lower pressures. This is why ORC can be used for electrical energy generation in conjunction with waste heat temperatures of 90 °C and above. Depending upon the temperature level, an ORC can be used to achieve an efficiency factor of 24%.

Within the sorption chillers, cold water is produced via absorption or adsorption processes, which is then available to be used as required. In this way it is possible to substitute cooling from traditional compression refrigeration units and to save the corresponding power consumption.

This method involves increasing the temperature level of the useful heat generated by augmenting it with higher-value energy in order to make it usable. This higher-value energy could be either electrical power or heat from a high-temperature source which is potentiated using compression or sorption heat pumps in order, for example, to cover the heating requirements of a given property or of a production process.

In addition to the above mentioned technologies for industrial heat recovery, there are a range of other technologies that are used less frequently due to certain special parameters.

These include, for example:

In terms of deciding which specific technology can be used for heat recovery purposes, there are a number of criteria that can be applied to restrict the range of potential technologies.

The temperature level of the available waste heat source is one of the most important factors when choosing the most appropriate technology for industrial waste heat recovery.

In general, it is true to say that it only makes economic sense to consider the generation of electrical power from waste heat in the medium to high temperature range. Low temperature waste heat can also be used for heat pumps, chiller units and heat transformation processes. Heat recovery/displacement is possible at all temperature levels.

The following graphic shows the various technologies arranged by temperature level as well as by plant power output (in terms of the usable energy yield). 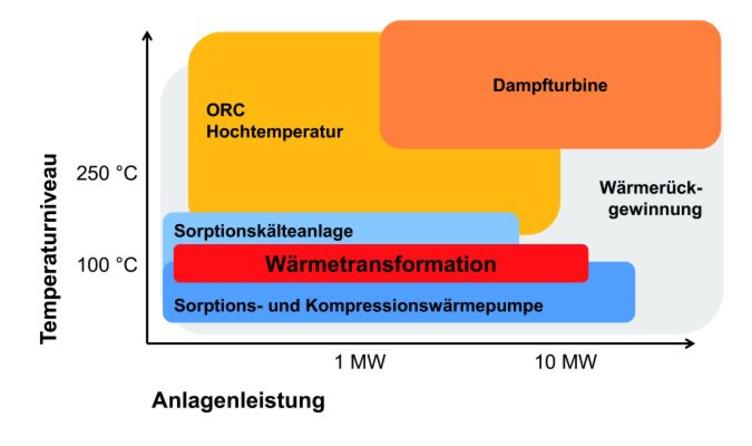 The waste heat thermal output is primarily dependent upon the following factors:

The waste heat thermal output can be calculated from the pre and post thermal transfer medium temperature difference together with the volume flow. The composition of the exhaust gas/fluid has a decisive influence on its energy content and therefore also on the extractable thermal yield. In addition, the mixture could contain corrosive substances, which need to be taken into consideration when selecting the material for the heat transfer medium and may have an impact on the investment costs.

Simultaneity of potential and demand

For an optimum and simple industrial waste heat utilisation it is advantageous if the heat supply from waste heat recovery exactly matches the energy requirements. If not, then storage media need to be employed as buffers. At this point in time, the use of storage with waste heat to electricity conversion technologies is not economically viable. For this reason, any excess energy not consumed must be fed into the national grid. In principle, it is also possible to operate the heat recovery plant under partial loading conditions.

Non-continuous availability of the waste heat source results in more power-up and power-down processes within the waste heat recovery plant. This subjects the material to increased thermal stresses, which can, in turn, result in higher maintenance and repair costs at the waste heat conversion plant.

Beyond the above mentioned criteria there are a number of additional factors which have a bearing on the choice of technology both from an energetic and an economic standpoint. Among these are the local spatial conditions. To minimise the investment costs, the source of the waste heat should ideally be close to the heat sink.

A further consideration is concentration. It is significantly easier and more cost effective to exploit a single concentrated waste heat source than several distributed sources.

From an ecological perspective, the generation of useful energy from waste heat is CO2 neutral. No additional primary energy carriers are introduced for the conversion of waste heat into usable energy. Another ecological consideration is the fact that the useful energy gained through this technology substitutes that which would have been consumed from other energy sources that do consume primary energy carriers during the conversion process. This substitution reduces the utilisation of primary energy sources, for example, in the production of process heating, electricity or heating.

In addition, this energy substitution has economic effects. By saving the thermal or electrical energy that would have to have been supplied through alternative energy production processes, the cost of fuel or electrical power can also be saved. Energy expenditure is often a significant cost factor, which directly influences the ability of production firms to compete in the market. By contrast with the consumption of energy from public sources, the costs associated with the conversion of waste heat to usable energy can be calculated over the long term. This reduced the dependency on the energy markets and the concomitant risk of unpredictable price increases. Over and above this, the provision of process heating through waste heat exploitation can result in a lower CO2 certificate quantity requirement, which, in turn, results in cost savings in operation.

The heat recovery industry has an enormous potential to significantly increase the energy efficiency of production processes for a wide variety of trades and to reduce the use of fossil fuels. The technologies used by GETEC for the utilisation of waste heat are all proven and robust applications, comprising state-of-the-art technology capable of sustaining lengthy utilisation periods. Waste heat recovery is a sustainable, environmentally-friendly way to conserve resources whilst increasing energy efficiency.

The cost of fossil fuels will increase over the long term. This trend can be countered by the use of a waste heat recovery plant, which lowers fuel costs and reduces dependency on public supply markets by the in-house production of usable energy. Why not reap the benefits of GETEC's long-term know-how?