Technologies Process steam in the industry

In the industry, process steam is a common term for water vapour that is used directly in an industrial process. In this context, the utilisation is often limited to the supply of heat for example for cooking, evaporation or distillation processes. In addition, drying processes or the supply of heat in connection with endothermal reactions in the chemical industry can also be realised with process steam.

The supply of industrial processes with heat is an essential task to secure the economic value creation. Based on the specific requirements of individual processes, it often differs considerably from the supply of heat to rooms.

In contrast to liquid heat transfer media, such as water or thermal oil, process steam is characterised mainly by the fact that most of the energy is contained in the form of latent heat in the enthalpy of vaporisation. In contrast, the sensible, tangible portion of the heat is negligible. 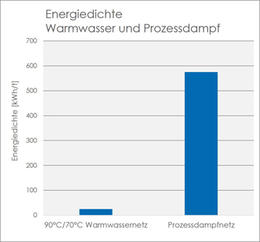 Accordingly, most of the energy associated with the steam generation is required for the phase transition of the water into the gaseous state. This energy is released when the steam transitions back into the liquid state, the condensation. For 1 kg of water, the condensation heat released in the process corresponds to approximately 0.6 kWh. To provide the same amount of heat with hot water, more than 25 kg would need to be heated by 20 K or cooled accordingly, in spite of the high thermal capacity of water.

Thus, the mass-related energy density of steam is significantly higher than the one of liquid heat transfer media. This affects the operating costs in particular of large-scale heat grids, because the required mass flow rates need to be realised by pump performance.

Moreover, the heat transfer at a heat transfer surface is relatively high in connection with both the evaporation as well as the condensation; this is associated mainly with structural advantages, particularly when it comes to the design of corresponding heat exchangers. 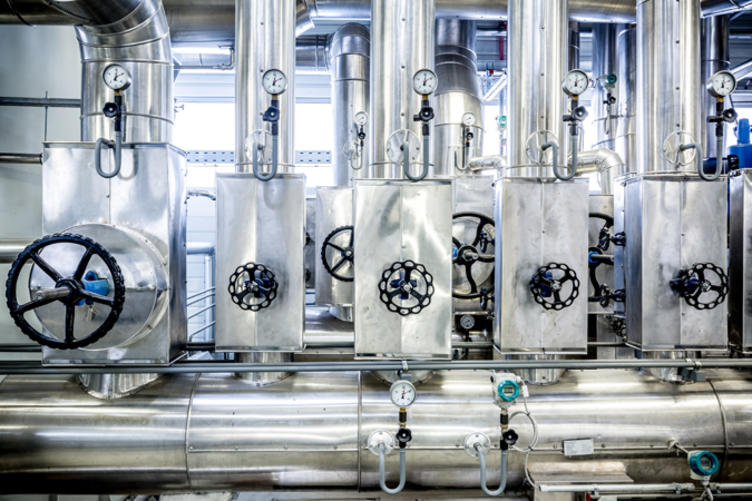 The disadvantages of a steam grid are essentially the high safety and integrity requirements. In contrast to a liquid, steam is a compressible medium. In the event of a disaster, highly compressed steam might escape like an explosion, thereby not only causing thermal damage, but also physical destruction. Compared to a hot water supply system, the high expenses associated with the safety of the conduit, the control and fixtures, result in higher specific investment costs. The heat loss in a saturated steam pipeline system does not lead to a decrease in the temperature, but to partial condensation of the steam. The condensate must be removed in special devices.

Process steam as by-product in the industry

Water vapour is a suitable working medium, which is used in most steam power processes for the generation of electric power. In the process, water is evaporated at high pressure, the compressed water vapour is expanded in a turbine, which supplies mechanical energy and electrical energy by way of a generator. The steam is then condensed and the liquid water returned for evaporation by way of feed-water pumps. By extracting steam from the turbine (extraction turbine) or utilising the steam past the turbine (back pressure turbine), for example for use in industrial processes, the supply of process steam and the generation of electric power can be combined. High overall efficiencies can be achieved with the double utilisation of the steam. Thanks to its ecological benefits, the so-called heat and power cogeneration is also promoted politically.

Other than water vapour, it is also possible to evaporate organic oils and use them as working or heat transfer media. This makes sense if special requirements regarding the pressure and temperature apply. However, water vapour is the medium of choice in the majority of cases.

Water is one of the most common elements on our planet. Its physical properties have been studied and documented extensively. Experience with the use of water and water vapour as heat transfer and working media dates back to the beginning of the industrial revolution. Water as such is relatively inexpensive, entirely non-toxic for human beings and animals, non-flammable and easy to handle.

In essence, a distinction is made between two boiler types, based on their different designs. 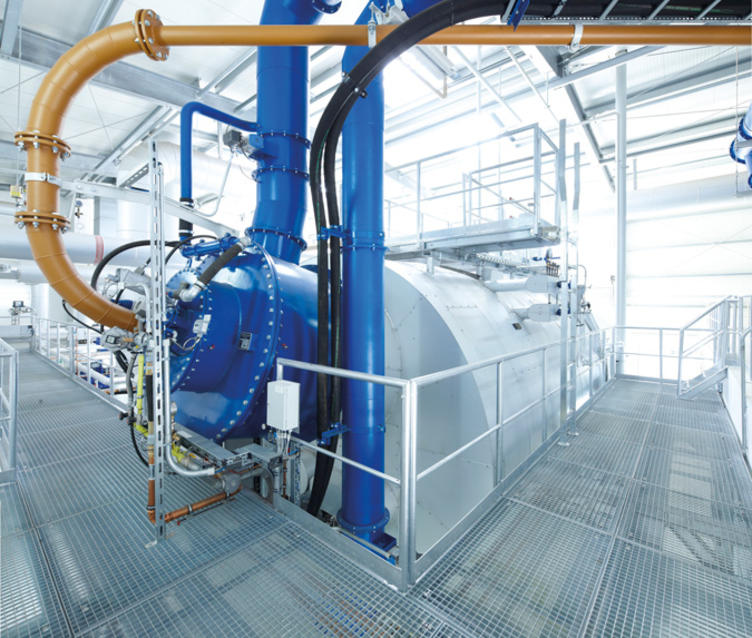 The shell boiler is a cylindrical container partly filled with water, which mostly used to be heated from externally in the beginning. With the new designs, the combustion chamber is on the inside of the boiler and the flue gas is lead through the boiler in part through several flues. For this reason, this type of boiler is also known as fire or smoke tube boiler. This type of design achieves a high efficiency with relatively low technical expenses. The style of the boiler additionally entails a buffer effect, which simplifies the control and ensures a reliable steam supply, even if the demand fluctuates. The disadvantage is the labour-intense cleaning of the smoke tubes, which affects the selection of the fuel among other things. Gas or oil burners are most commonly used, but pulverised lignite or lean gas or synthesis gas burners are also being used. Moreover, the realisable pressure of the steam is limited in view of the high safety requirements involving the boiler shell. As well, the performance of each individual boiler is rarely rated beyond 50 MW.

The water-tube boiler is the second of the two boiler types. In this case, the water to be evaporated is guided through a combustion chamber by way of countless pipes. This design is technically more elaborate, especially if it is intended to achieve high efficiencies. As an advantage, almost any fuel can be used. The current line-up ranges from conventional lignite and hard coal fired boilers to biomass and waste incinerators. Furthermore, the performance is almost infinitely scalable and extremely high pressures can be realised thanks to the small volumes of the water pipes.