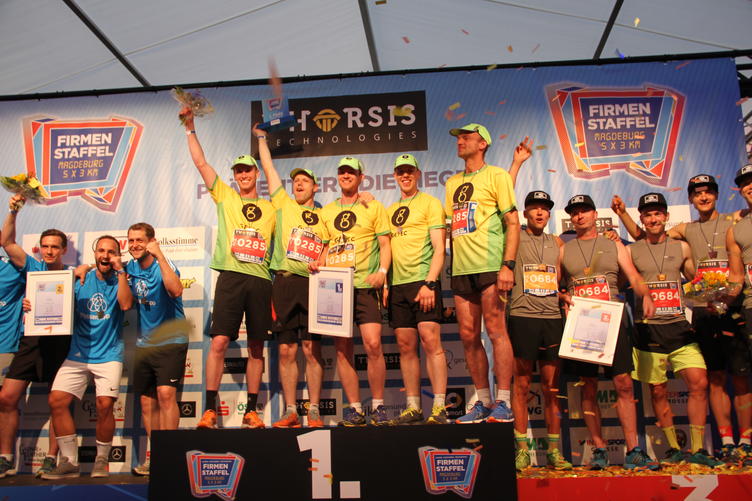 The GETEC men’s team claimed the title of the Magdeburg company relay race for the eighth consecutive time. The starting signal for the anniversary race was fired on 14 June. The event was held for the 10th time, with 5,000 racers from 1,000 teams in the starting blocks. In the end, the suspense was intense: With just 5 seconds ahead, the GETEC team was able to claim the trophy. With a total time of 55 minutes and 22 seconds, Oliver Stutzer, Eric Jordan, Georg Vordermair, Marcus Bohndick and André Sommer were the first team to cross the finish line.

All nine GETEC teams wore yellow-green shirts, GETEC’s new colour scheme. This was also pointed out during the victory ceremony: The moderator asked our racers to come to the podium with the following comment: “Like in bicycle racing, the GETEC team has defended the yellow jersey for the seventh time in a row.”

A total of six men’s teams, two mixed formations and one women’s team participated on behalf of GETEC. On this beautiful sunny day, all racers passed the finish line after three kilometres, with no reported injuries and with some personal records.

Needless to say that the victory of our men’s team was duly celebrated. The live music in the party tent created a festive mood, and the wearers of the yellow-green GETEC shirts were seen celebrating on the dance floor into the wee hours of the morning.

Entertainment was also organised for the young GETEC fans: Group CEO Thomas Wagner was on hand to give away the extremely popular, large, newly designed GETEC balloons to the children in attendance.